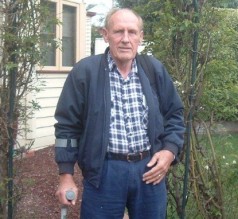 was a worker at Witenoom from August 1965 to April 1966. I don’t know that I have a story as such because most people who were there would have similar memories.

The flight there in a DC3 was harrowing. Flying over the Hamersley Range was so bumpy that only the pilot and myself were the only ones not airsick but the hostess and six other passengers were! The airport was a tin shed with a 2-gallon water-bag and the plane buzzed the airstrip prior to landing to scare off the ‘roos then down onto the gravel strip to heat and flies.

One thing that should be mentioned is the conditions at the single men’s quarters. The rooms were OK but the food was disgraceful. There was no such thing as health and safety back then and almost everyone who ate there contracted dysentery.

The bus trip to the  mine was about 7 miles and the bus would stop three or four times per trip to allow men off to relieve their bowels. Then walking down the main drive to the stopes would see men ducking off to the side then later having to stop working several times each shift to ease the pain. It was very painful and I lost 16 lbs in weight in two weeks which also had the effect of weakening the body.

Fortunately for me, my wife came five weeks after me and two weeks later we got a house allocated so I could get some decent food again. My health improved and I gained some weight but only returned to my normal weight after getting back to Perth.

The other thing that stripped the weight off was the heat and humidity underground. It was a constant 35-39 degrees and humidity in the high 80’s that caused my sweat to run out of my boots when walking. Well, this was only meant to be a short note but I’ve run off at the mouth, haven’t I. There are lots of memories and I could rabbit on for ages.