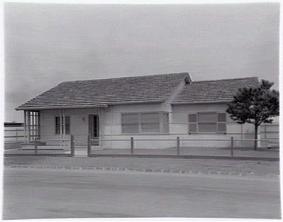 The development of asbestos cement (fibro) in the 1920s as a house-building material fed the post-war housing boom in Australia. Flat boards provided exterior and interior walling while corrugated boards were used for roofing and fencing. Hardie’s Super Six became ‘the great Australian roof’.

Fibro was marketed as fireproof, durable, easily transportable and suitable for hot climates. Above all, it was relatively low cost. Owner builders, country builders and those wanting holiday houses or shacks were happy to build in fibro while the home handyman also used fibro for extensions, especially verandahs.

Its greatest use came with the explosion of house construction in the postwar years from 1945 to the close of the 1960s. By the mid-1960s, it featured in almost 20% of all housing stock.

While fibro houses proliferated in these decades, they were not uniformly spread across the States and Territories. They were (and are) most common in New South Wales, Western Australia and the Northern Territory, were built less often in Queensland and occur only infrequently in Tasmania, Victoria and South Australia.

As well, fibro houses were not distributed evenly within cities and towns; rather their distribution mapped class difference on the townscapes. State housing authorities built whole suburbs of fibro houses, while in more wealthier residential areas of owner-occupiers fibro was restricted to sheds and fences.

The current health danger for residents (owners and renters) and problem for local government authorities is that this building fabric is aging and, in many instances, fraying. Home renovators are also now disturbing the old sheeting, either through cleaning, painting or during removal. At every stage they run the risk of releasing asbestos fibres into the surroundings.

When Dr Greg Deleuil’s mother fell ill he was shocked when she was diagnosed with mesothelioma. But as a medical practitioner who had specialised in asbestos-related disease he could trace her asbestos exposure to the old fibro house in Darwin which had been his childhood home.
Click here to listen>>

Diane Kilminster was born in Bruce Rock and eventually settled with her husband on their farm in the same area of regional Western Australia. She was doing just what everyone else was doing in the late 1970s when she helped her husband to erect an asbestos fence around their farmhouse. Then thirty years later she was diagnosed with mesothelioma, triggered by that long-ago exposure.
Click here to listen>>