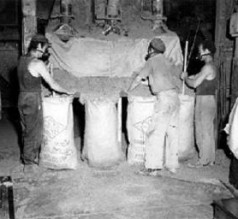 In 1943 Australian Blue Asbestos Ltd (ABA), a CSR subsidiary, began mining and milling asbestos in Wittenoom. The operation ran until December 1966, first in Wittenoom Gorge and then in Colonial Gorge.

Both the Western Australian and Australian governments were keen to ‘populate the empty north’ and encouraged CSR to establish the industry. They provided subsidies and helped to build the new town of Wittenoom to house the workers and their families. In the miserable years following the Great Depression, impoverished prospectors flocked to the northwest of the state in the hope of digging their way to a fortune. Historian Lenore Layman describes the mood of these times.
Click here to listen>>

CSR believed it had the promise of a profitable venture – a strategic mineral with the prospect of a strong export market in long fibres suitable for spinning and weaving.

As well, the company had a small building materials division, which could be strengthened by the production of asbestos-cement sheeting. The postwar building boom provided the promise of riches for companies able to ride on its back, and the opportunity proved irresistible to CSR.

Thus a company whose primary business was sugar refining, with no mining experience, embarked on a commercial venture that was doomed from the start, and left ABA’s and CSR’s workers with a terrible legacy. Historian Lenore Layman explains.
Click here to listen>>

When the asbestos mine opened in Wittenoom it was seen by the Western Australian government as a boon for the state. Dr Jim McNulty, former WA Commissioner of Health, describes the mood of the time.
Click here to listen>>