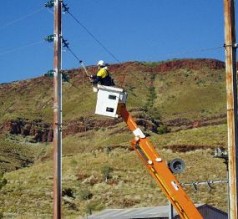 By the 1960s the mounting medical evidence that asbestos posed real health dangers to the miners and their families began to raise questions about the future viability of the Wittenoom mine, even while the mining company CSR and most government authorities continued to turn a blind eye.
In these decades of the 1940s-1960s, Australia had almost no experience in mining and milling asbestos fibre, and Western Australia had none. Only a small number of doctors in the State’s Public Health Department, including Dr Eric Saint and Dr Jim McNulty, understood the extent of the danger. Both felt that their words of warning went unheeded, with mine management reluctant to acknowledge the risks and the Mines Department over-confident that it could solve Wittenoom’s dust problems. The WA Public Health Department struggled to obtain more accurate dust measurements in mine and mill. It wasn’t until the end of the 1950s that the Department made regular physical inspections of workers although chest x-rays were taken from the start.
In Western Australia the first publicly-recognised diagnosis of asbestosis (recorded in official statistics) was made in 1959, and the first diagnosis of mesothelioma caused by contact with asbestos fibres was reported in 1962.
Closure of Wittenoom mine and mill
In December 1966, CSR made the decision to close its Wittenoom works. The decision was made on the basis of economics, rather than safety, because the company considered the venture did not have a profitable future. Thus to the very end the health danger was still not a significant factor in company decision-making.
People who lived and worked in Wittenoom in these years stress that  ‘We didn’t know’, ‘No one told us anything’. They had no idea of the danger they lived with, nor of the suffering they would face as families decades later when, after the long latency period characteristic of the disease, mesotheliomas would be diagnosed.
After the works closed the town itself stayed open and became a popular tourist site.
Closing down the town
After decades of threats to do so, the WA Government finally closed the town of Wittenoom in 2006. It was declared a contaminated site and all government services were withdrawn. In June 2007 Wittenoom was degazetted and removed from the map. But its legacy is ongoing and all former Wittenoom residents live in the shadow of disease and possible death. 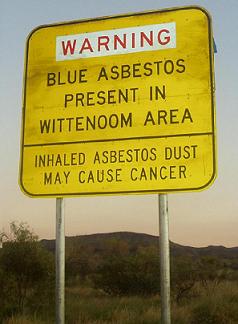 Wittenoom’s deadly legacy
The asbestos-related cancer mesothelioma is uniformly fatal, with an average life expectancy from diagnosis to death of nine months. In Western Australia 1500 people have been diagnosed with this cancer since the first recognised case in the early 1960s. Of those 1500 people around 300 came from Wittenoom. Many of those diagnosed are former Wittenoom children who have died of the disease in mid-life. This number of diagnoses and deaths makes Western Australia (proportionate to population size) one of the world’s mesothelioma hot spots.
The stress of living under the constant threat of disease has taken its toll on the former Wittenoom workers and their families.  For Liborio Napolitano the strain of seeing his friends and former Wittenoom colleagues fall victim to asbestos-related diseases one by one increased his dread that he would one day succumb to asbestosis or mesothelioma himself.  His wife Angela describes what it was like for him to live under the shadow of death.
Click here to listen>>
For ex-miner Josef Schrott, it was in the early 1980s that he began to experience breathlessness and other early symptoms of asbestosis.  While anyone working in the mining industry is aware of the risk of lung disease, asbestos-related diseases are of a different dimension and Mr Schrott laments the fact that he was never made aware of the dangers.
Click here to listen>>
For Butch Taylor, it was decades after the family’s stint at Wittenoom that tragedy struck.  In 1999 Butch lost his wife to mesothelioma, and then his son Brent was found to have the cancer as well at the age of 31.  For Butch the double loss has left him with a legacy of guilt.
Click here to listen>>
Since the closure of the mining town the consequences of CSR’s blunder have spread far beyond Wittenoom. In 1957 it had reached agreement with James Hardie on the purchase of Wittenoom’s blue asbestos for use in Hardie’s asbestos-cement building materials. In this way blue asbestos spread across Australia’s built environment.
The download speed is dependent on your internet connection. The video may take a few moments to load.