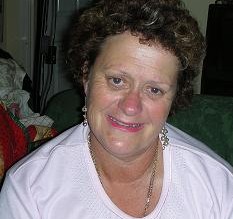 Julie Mackay’s parents met during the war and married in 1949. Julie’s father was in the army and in those hard post-war times the family lived with the extended family in a house in Fremantle. Even though Julie’s father was a welder and boilermaker, when he left the army in the early 1950s work was very difficult to find. So in 1953 when a job came up in Wittenoom, it was an attractive proposition, doubly so because it meant the family would have a house to themselves. But life in Wittenoom was quite hard for the young family