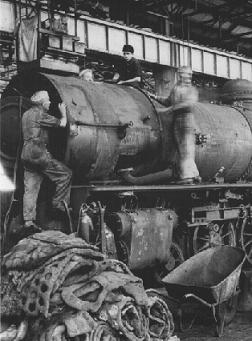 Many workers were exposed to danger when they used asbestos products in their workplaces. Rail workers, power station workers, plumbers, boilermakers and shipbuilders were among those who worked with asbestos lagging or insulation.

Building and construction workers cut and fitted asbestos sheeting, pipes and insulation and, in so doing, breathed in fibres released into the air and were especially vulnerable. Spraying asbestos insulation, such as Limpet asbestos, during building construction resulted in gross exposures. Garages where mechanics carried out automobile repairs were also dangerous workplaces. Many of these workers who worked with products containing asbestos became victims of a second wave of asbestos related disease.
Ross Hook began his working life as an apprentice maintenance fitter in the Midland Railway Workshops. In the stripping pits of the workshops he worked in clouds of asbestos dust, released as the asbestos lagging was stripped from the locomotives during their maintenance refits. Here he gives a graphic account of what life in the stripping pits was like.
Click here to listen>>
Reg Jones trained as a plumber and, as his wife Elaine explains, he came into contact with asbestos without any indication that the material might be a danger to his health.
Click here to listen>>
Click here to read about the impact of Asbestos at the East Perth power station.
The download speed is dependent on your internet connection. The video may take a few moments to load.