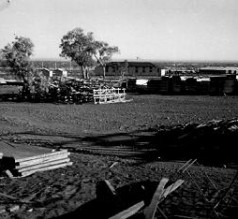 Living conditions in the town were basic, and in the Single Men’s Quarters they were particularly unsatisfactory.

Residue from the milling process, called tailings, were spread around the townsite to lay the red dust. This practice, which the health authorities tried to stop in the 1960s, carried the dust danger into the town’s schools, shops and homes. It has greatly increased the risk of mesothelioma among those who lived as children in Wittenoom.

Here you can listen to former residents of Wittenoom describing what life was like in the town.

Robyn Guyton’s parents were among the first settlers at Wittenoom in 1943. Her father Eric Yeldon was charged with preparing the site. Ironically there was also a family connection when the mine was closed down. Here she describes what life was like for her parents in the early years of the establishment of Wittenoom.
Click here to listen>>

Victor and Doreen Lyons lived in Wittenoom from 1947 to 1951. As some of the first people to move to Wittenoom, they lived in the settlement in Wittenoom Gorge near the mine in what was an apparently idyllic setting. Here Doreen describes life in the early days of Wittenoom.
Click here to listen>>

Julie Mackay’s parents met during the war years and married in 1949. Julie’s father was in the army and in those hard postwar times the family lived with the extended family in a house in Fremantle. Even though Julie’s father was a welder and boilermaker, when he left the army in the early 1950s it was very hard to find work. So in 1953 when a job came up in Wittenoom, it was an attractive proposition, doubly so because it meant the family would have a house to themselves. But life in Wittenoom was quite hard for the young family.
Click here to listen>>

Ted Grant went to Wittenoom in 1956, arriving on his 12th birthday and staying there for nine months. His father was the paymaster at the mine, and ended up as a train driver bringing the ore out of the mine. To Ted, Wittenoom was a children’s paradise. Here he describes the landscape, defined above all by the asbestos which was underfoot and in the air.
Click here to listen>>

In 1960 in Australia, times were hard and 24-year-old Clarence ‘Butch’ Taylor found he wasn’t earning enough money to support his family. He moved to Wittenoom and worked there for five years, a stretch he describes  as ‘a bit of a record’. Initially, the move seemed to pay off, with his family benefiting from the lifestyle.
Click here to listen>> 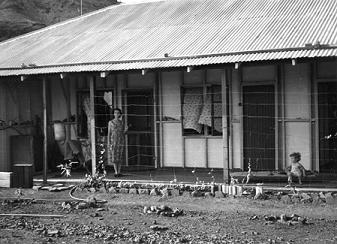 Rod Powell is an electrician who spent a year of his life working at Wittenoom in 1960 working in the underground mine as well as the mill. Here he gives us a glimpse of the layout and lifestyle of Wittenoom.
Click here to listen>>
Life in Wittenoom held particular challenges for the wives as they tried to cope with the dust, which was everywhere in the town. Here Celestina Delpero talks about how she washed her husband’s work clothes – unaware of the hazards this innocent task might pose to the women of Wittenoom in later life.
Click here to listen>>
Margaret Page’s family arrived in Wittenoom in 1948 from Collie, but nothing prepared them for what they would find there. The town was just being built and the standard of housing was more basic than anything they had experienced before.
Click here to listen>>
When Margaret Page arrived in Wittenoom, the town was so new that it didn’t yet have a school. So the children had to ride out to the minesite where they had their lessons together in a single room. Asbestos dust was an accepted part of every playtime activity.
Click here to listen>>
As Wittenoom became established so did its schools, and their rolls reflected the demographic changes in the town as the decades went by. Researcher and former resident Sylvia Lovenfosse talks about the delivery of education in the town.
Click here to listen>>
In 1961 Wittenoom suffered massive flooding from two nearby cyclones. Rod Powell recounts the tale of having to haul two senior members of the community to safety from their sinking car, and the pros and cons of the deluge.
Click here to listen>>
One characteristic that was unique to Wittenoom was the asbestos tailings that were everywhere in the town. In ignorance of the dangers of the tailings, they were liberally used around homes and as a covering for roads and playgrounds. As former Wittenoom resident Sylvia Lovenfosse explains, this effectively brought the dangers of the mine into the homes where wives and children were put at risk.
Click here to listen>>
The download speed is dependent on your internet connection. The video may take a few moments to load.