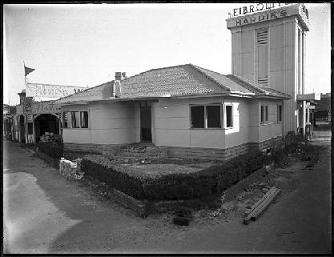 Of all the names linked with the history of asbestos in Australia, that of James Hardie stands out. This was the manufacturing company which dominated the market for asbestos products during the decades following the Second World War.

The iconic Australian fibro house which populated the suburbs around much of the country during the postwar housing boom, was built with asbestos-cement roofs, walls and fences. At the same time, James Hardie’s asbestos-cement pipes and asbestos lagging were woven through the industrial landscape.

But the boom years of the 1960s-1970s were overtaken by intimations of doom as the company found it harder and harder to ignore the warnings about the danger of asbestos to human health. As the miners who dug the mineral out of the ground began succumbing to asbestos-related diseases years after exposure it became evident that those handling the manufactured products could be equally at risk.

Given the long latency period between exposure and the appearance of disease, it was only in the 1970s that the official death toll began to rise and the public started to ask questions about how much the company knew, and when it knew, about the deadly legacy of asbestos.

The battles for compensation began, and continue to this day, drawn out by James Hardie’s attempts to minimise its exposure to a multi-million dollar liability.

Click on the links below to read more about James Hardie.