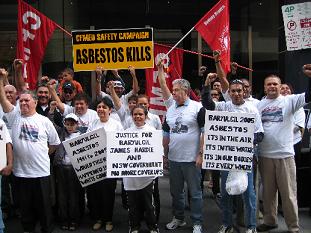 Baryulgil was a small chrysotile asbestos mine in northeast New South Wales (near Grafton) which was worked by the Bundjalung/Banjalang people who are the indigenous people of the area.

The Wunderlich company began mining and milling there in the early 1940s, and in joint venture with James Hardie from 1944. James Hardie, through a subsidiary company, took full control in 1953, ending its involvement only in 1976. The works closed in 1979. Baryulgil’s fibre was railed to Sydney but never contributed significantly to James Hardie’s chrysotile requirements, the great bulk of which was imported from Canada. With a workforce of 30-40, the ore was mined and milled in very dusty and dangerous conditions.

Dust permeated workers’ houses, and women and children were fully exposed. As at Wittenoom, tailings (mill residue) were spread around the community to settle the dust and provide material for road works. Children played in the tailings and on the mine site itself.

‘We didn’t know it was poison,’ explained one wife.

Many members of the community, especially men, have died prematurely but it has been difficult for people to win workers’ compensation or compensation from James Hardie because of the generally poor health status of the community and the prevalence of chronic bronchitis, pleurisy and pneumonia. Cases of asbestosis and asbestos-related lung cancer have been identified.