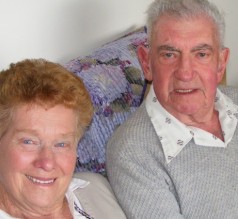 Ian Moore, born in 1926, has lived in the Latrobe Valley, Victoria, most of his life and developed asbestosis from working as an electrician at the State Electricity Commission of Victoria (SECV). First he was an apprentice electrician at the SECV for five years and after a stint driving trucks Ian returned to work at the SECV in 1964. Since his diagnosis in 2002, his disease has progressed to server asbestosis. Betty Moore, who has been married to Ian since 1951, supports and cares for him every day. Here, they share their experiences.

Not eligible for free oxygen
Ian is so starved of oxygen that he must use an electric scooter to get to and from the local shops, as he finds walking too strenuous. Despite this, Ian is still not eligible to receive an oxygen concentrator free of charge from the Government funded equipments program. GARDS currently lends him an oxygen concentrator for free, which he needs to use twice a day to ease his breathing difficulties.
Click here to watch on YouTube>>
The download speed is dependent on your internet connection. The video may take a few moments to load.