The Battles in Australia 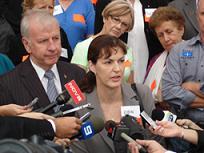 Public silence was not broken in Australia until the mid-1970s when journalists reported on the lethal dangers. The first workers’ compensation actions by people with asbestos-related disease had already begun by that time but it was not until the sensational story became public that the major battles began.

One of the first workers’ compensation cases, surprisingly early, was forgotten until it was unearthed by the lawyer John Gordon. In 1939 the widow of Samuel Jones, a former miner as well as James Hardie worker from NSW, sought compensation from James Hardie for the ill health and death she attributed to her husband’s asbestos exposure. The case failed, with the court ruling that silicosis (resulting from his mining history) caused his death not his asbestos exposure.

In the 1960s a small number of workers’ compensation cases were fought, the number of cases rising rapidly in the 1970s and 1980s. Many employers were named, not only James Hardie, Wunderlich and CSR, but also state government departments (for example the Railways and Electricity Commissions), and building and construction firms.

Common law litigation began in the 1970s, with major victories for the plaintiffs won in the late 1980s.

The first breakthrough came in 1985 in Victoria. Harold Pilmer contracted mesothelioma from asbestos exposure in the 1940s and 1950s while selling asbestos products and loose asbestos at Mathesons, a hardware store. Peter Gordon, of the law firm Slater & Gordon, led the case. Harold Pilmer received damages of more than $200,000.

In 1986, Tony Henderson, a former Latrobe Valley pipe fitter, won his case against the Victorian State Electricity Commission and two other companies. It was the first victory relating to lung cancer in a smoker, his employer found negligent, with Tony Henderson’s smoking ruled to be contributory negligence. He therefore received some monetary compensation although not as much as he would have received had he been a non-smoker.

These first successes have been followed by a steady succession of plaintiffs’ victories, but not one of them was won without a serious struggle.

Vital employer documents sought at legal discovery were at first few in number. Only gradually, under pressure of continuing litigation, did more and more company and government evidence emerge for plaintiffs’ lawyers to scrutinise.

In this ongoing battle, one of the successes was to win changes to the statute of limitations in each state, allowing plaintiffs more time between the event of their asbestos exposure and their action to seek recompense for the damage caused by that event.