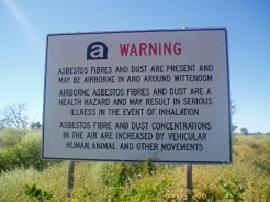 In the latter part of the 19th century, a period of rapid industrialisation, the discovery of asbestos in the 1880s presented the industrial economies with what appeared to be a miracle mineral.

Its properties as a fire retardant and its flexibility and malleability made it perfectly suited to dealing with some of the hazardous conditions that were emerging in the industrial workplaces at the end of the 19th century.  Historian Lenore Layman explains.
Click here to listen>>
While asbestos at first had largely industrial applications, by the beginning of the 20th century its value as a building material began to be recognised. By the 1930s its use in the wider community started to accelerate, but asbestos really took off in the postwar housing boom, stoked by the enthusiastic recommendations of the companies manufacturing asbestos products. Historian Lenore Layman tells more.
Click here to listen>>
At first asbestos was associated with poorer housing, but the housing boom in the mid-20th century saw its use accelerate. It now made its way into other building products which were used in the construction of all sorts of public buildings from the mid-1970s and beyond. Historian Lenore Layman explains.
Click here to listen>>
With the increasing use of composite materials and product diversification, an ever greater number of products containing asbestos fibre entered Australian workplaces without workers being aware of their asbestos content. As a result, most Australian workers have been exposed to the material. The zenith of the Australian asbestos industry is still recent history: asbestos fibre imports and consumption reached their peak during the years from 1968 to 1977.
The download speed is dependent on your internet connection. The video may take a few moments to load.