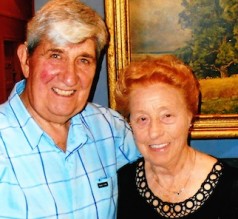 Originally from Scotland, married couple Duncan and Jessie came to Victoria’s Latrobe Valley in 1957, where Duncan began work for the State Electricity Commission of Victoria (SECV) as a turbine driver at 29 years of age.

Duncan remembers workers lagging the steam pipes in the power stations with an asbestos paste and the way the light streaming through the power station windows would highlight the dust floating in the air. He was not given gear to protect from asbestos while working there, only his overalls and some hearing muffs.

Jessie says she wasn’t aware of the dangers of asbestos when Duncan worked for the SECV:

“I didn’t know what it was. You washed the overalls every week and shook them and [had] no idea at all what was happening. I think it’s the most awful disease. I mean you go to work, pick up your pay, you don’t hope to get a disease like this that’s killing everybody… Maybe people are more aware of it now, but certainly not then.”

“We’re all aware of it now, of course”, Duncan says. “I’ve lost many work mates through the asbestos.”

Today, Duncan and Jessie still live near Moe in the Latrobe Valley and say they often see people about town affected by asbestos related disease.