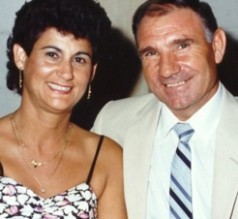 Liborio Napolitano was 21 when he went to work at Wittenoom. The money was good and he believed the sacrifice of leaving his fiancée was worth it to invest in their future together. He knew nothing about the health risks from asbestos and it was only years later as he saw his former workmates die one by one from asbestos-related diseases that he began to realise that his own days might be numbered. This cast a cloud over his life until he did indeed fall ill with mesothelioma, succumbing to the disease in November 1994. Before he died he launched a successful court case for compensation, fueled by anger to ensure that his story would be told so that others could learn from his experience. His widow Angela tells his story.

You can read more about Angela and Liborio’s story at www.angelanapolitano.com

The download speed is dependant on your internet connection. The audio may take a few moments to load.