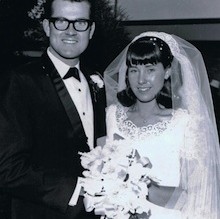 Margaret met her husband, Graeme, at her local milk bar the day before her 21st birthday in 1967. There was an instant ‘spark’ between them and from that day on they were inseparable. They were married within the next 12 months and had two children together.

Graeme worked as an engineer in the pulp and paper industry from the 1970s and was often in charge of the maintenance of paper and tissue machinery, which contained asbestos insulation in the form of lagging and asbestos cement sheeting. Due to this asbestos exposure Graeme lost his life to mesothelioma in 2010 at 65 years of age. Here, Margaret tells their story.

Graeme’s asbestos exposure and awareness
The machinery in the powerhouses of the pulp and paper mills that Graeme worked in contained asbestos lagging. With the heat asbestos dust was stirred up in the air. While Graeme was not fully aware of the dangers of asbestos, he always made sure to leave his work overalls on the clothes line outside and shower before he entered the family home after work. He made it clear to Margaret not to wash his clothes or to allow the children near them.

Graeme’s symptoms and incorrect diagnose
Two years prior to being diagnosed with mesothelioma, Graeme’s symptom of sudden shortness of breath started to worsen. Margaret remembers doctors testing and looking for the wrong things before discovering the real problem two years later. She tries not to think about it, but feels that if he had been correctly diagnosed earlier on, the outcome might have been different.
Click here to watch on YouTube>>

Challenges of being a carer
As Graeme’s full time carer, Margaret was devoted to his every need but struggled internally with not wanting to treat him like a dependant child. She became very protective of him and just wanted to make him feel better. She describes it as “the best and the worst job that anyone can have”.
Click here to watch on YouTube>>

The day Graeme passed away
When Graeme was first diagnosed with mesothelioma he was given three months to live. Graeme surpassed that expectation and lived for two years. On the 19th of April, 2010, Graeme was due to return home from hospital after treatment when his doctor decided to have him stay one more day to be sure his elbow was okay after a blood clot. While he woke eager to go home, he slowly deteriorated during the morning and passed away with Margaret by his side.
Click here to watch on YouTube>>
The download speed is dependent on your internet connection. The video may take a few moments to load.