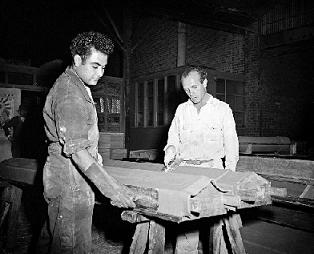 These factories produced mostly asbestos cement sheeting and pipes, although some friction products were made in Australia as well. Increasingly these workers were concentrated at the James Hardie company as it came to dominate the asbestos industry in Australia and the region.

These manufacturing workers were subjected to heavy asbestos exposure. Dust control was slow to be enforced and never fully effective. Like the miners, this group of workers was part of the first wave of asbestos-related disease, manifesting early on as asbestosis and later on as lung cancer and mesothelioma.

Historian Lenore Layman explains that there has been a long tradition of accepting the health risks at the workplace as part and parcel of industrial development.