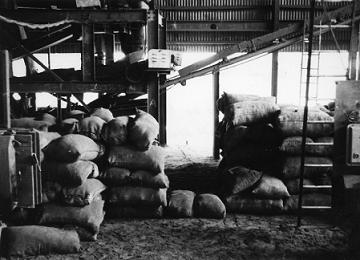 When the modern asbestos industry began in the 1880s the medical understanding about asbestos-related disease did not exist. Asbestos was thought to be a safe and useful commodity because it prevented the frequent fires which injured and killed many people when wooden buildings burnt.

Those who worked in industrial medicine stressed that asbestos mining and manufacturing had to be carried out with as little dust as possible. Dust, whether it was coal, quartz, cotton or asbestos dust, was known to be dangerous. In workplaces, however, dust remained uncontrolled. As a result, fibroses (that is, occupational dust diseases of the lungs) assumed epidemic proportions in many industries.

Asbestosis was one of these fibroses. It was first diagnosed among British factory workers in 1900 but not named until 1927 when the pathologist W E Cooke gave it the name that clearly linked it to the inhalation of asbestos dust. The disease was found to be dose-related; therefore the greater the exposure to heavy concentrations of fibre or the greater the length of time exposed to the fibre, the greater the likelihood of disease and the greater its severity. Asbestosis is a chronic and progressive condition, and medicine cannot stop that progress even after exposure has ended. The first recorded Australian diagnosis of asbestosis was made in 1933 in an asbestos mill hand from New South Wales and the incidence of the disease is still rising even though most of those diagnosed today were exposed to heavy doses of fibre half a century ago.

The Merewether Report published in 1930 by the British factory inspectorate spread knowledge of the danger of asbestosis around the world. Industrial and public health physicians pressed for dust controls to end gross exposures among workers in the asbestos industry. In 1938, the United States Public Health Service established the Dreessen standard, a threshold limit value for dust exposure in the asbestos industry of five million particles per cubic foot (5mppcf), which converts to 176 particles per cubic centimetre (176ppcc). This standard, very frequently breached, remained in place until the late 1960s when the technologies of fibre counting had improved and medical research showed that the standard did not control asbestos related disease.

A key turning point came in 1964 at an international conference in New York on the biological effects of asbestos. Dr Irving Selikoff’s research became a landmark by finding high levels of asbestosis among American insulation workers who were not employed in the asbestos industry but only used asbestos insulation products in their building, construction and maintenance work. The asbestos hazard was shown to have spread throughout the built environment to anyone who handled the industry’s products.

In the 1930s medical researchers had also discovered that asbestosis was not the only disease resulting from exposure to the fibre. Asbestos was shown to be a carcinogen. The 1955 report of the epidemiologist Sir Richard Doll established conclusively that asbestos fibres caused lung cancer. Those already diagnosed with asbestosis were predisposed to developing the cancer and the epidemic of tobacco use, especially among men at this time, only compounded the disease threat. Then in 1959 medical research in South Africa revealed another even more deadly form of asbestos cancer. Dr Chris Wagner announced the existence of mesothelioma in southern African asbestos mine workers. In Western Australia Dr Jim McNulty’s identification of mesothelioma in a Wittenoom worker quickly followed.   Mesothelioma is a malignant tumour of the pleural cavities of the chest (the lungs’ lining) or, less commonly, the peritoneal cavities of the abdomen (the abdomen’s lining).

Like asbestos-related lung cancer, mesothelioma is not dose-related and a relatively small exposure can be fatal for some people. It is uniformly fatal, with a median survival time of less than a year after diagnosis. Medical treatments, aimed at relieving symptoms and extending survival time, include radical surgery, chemotherapy and radiation therapy. The long lead-time, averaging 20-30 years between exposure and onset of symptoms, means that mesothelioma incidence will continue to climb in the twenty-first century. In the face of this multiple disease threat, public health authorities around the developed world tightened their regulatory controls. Britain’s 1969 Asbestos Regulations set a threshold limit value of 0.2 f/cc for blue and brown asbestos, and use of those fibres stopped.

The same regulations set the threshold limit value for white asbestos fibre at 2 f/cc. In the last decades of the twentieth century, the threshold limit values for asbestos fibres were reduced throughout the developed world, as medical authorities advised that people’s safety could be ensured only by the elimination of exposure altogether. In December 2003 the importation of asbestos in any form into Australia was banned. Unfortunately the world asbestos industry has not ceased to operate but has relocated to jurisdictions in the undeveloped and developing world where regulations are weak or non-existent.