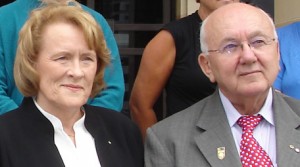 In 1982 Robert Vojakovic and his wife Rose Marie began their long involvement with the organisation, changing its name and overseeing its growth from its small beginnings into a nation-wide lobby and support organisation.

Under his presidency, the Asbestos Diseases Society has played a vital role in achieving better outcomes for victims of asbestos. It has lobbied state governments for changes to compensation legislation and also fought hard for increased funding for medical research to find both cures and better treatments for asbestos related diseases.
It has won the support of trade unions in its fight, used the press and other media to highlight individual suffering and to demand just recompense, and collected documentation from around the world as well as local archival sources to assist lawyers in making their cases. It has pursued the asbestos insurers to extract more generous compensation settlements. Above all, it has targeted the asbestos industry’s employers (CSR, James Hardie, government departments and agencies, and a multitude of others) with the goal of winning financial compensation for victims. The Society now provides support and assistance for victims from all around Australia.When Robert Vojakovic and his wife Rose Marie began their battle almost thirty years ago they worked a single shift amongst all the other social offerings at the North Perth Migrant Resource Centre for one afternoon a week. Here Robert talks about what motivated him to become involved.
Click here to listen>>
The Asbestos Diseases Society’s first case was that of ex-Point Samson worker Frank Crotty. Robert Vojakovic talks about how this case marked the start of a long campaign for justice for victims of asbestos-related diseases.
Click here to listen>>
The download speed is dependent on your internet connection. The video may take a few moments to load.