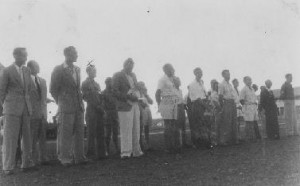 When Dr Jim McNulty diagnosed the first case of mesothelioma in a Wittenoom worker in 1960, it was, for a group of Western Australian clinicians, like watching the unfolding of a modern Greek tragedy.

For more than a decade, respiratory physicians at Sir Charles Gairdner Hospital had warned that the town’s asbestos industry would spawn an epidemic of serious lung disease among its workers. By the time Dr McNulty’s report of the late mill worker’s fatal cancer was published in the Medical Journal of Australia two years later, about 100 miners and millers at Wittenoom already had serious lung damage.

But it wasn’t until 1975 that Dr McNulty could pursue answers to important medical questions. As the state’s new Commissioner of Public Health, he wanted to know what the outcomes would be for the workers at Wittenoom; who was most at risk and the length of time between their first exposure to blue asbestos, or crocidolite, and evidence of disease – known as the lag or latency period.

He persuaded mine owner CSR to allow access to workers’ records and air quality data and to fund research into the incidence of lung disease. Then he handed the study to Professor Michael Hobbs (LINK HERE TO PROFILE take from Madden GP meso reg profiles doc in folder), a physician at Perth’s Sir Charles Gairdner Hospital (SCGH) with an interest in population health.

“We were amazed that CSR agreed to do it,” remembered Professor Hobbs. “But by then they were getting a bit of unfavourable publicity.”

Then began the “hard slog” of tracing the 6,505 men employed at Wittenoom between 1943 and 1966: “The employment records were archived at the old sugar refinery on the (Swan) river, but that didn’t cover everybody. So we went the Mine Workers’ Relief Fund – which was just a book with rows of signatures in it – and got details of another 2000 workers.”

Having identified the workers’ cohort, the researchers scoured electoral rolls, drivers’ licences, hospital records and death certificates to find out what had happened to the men.  According to Professor Hobbs sometimes they found data in unusual places: “Because about a third (of the workers) had come from overseas, mainly Italy, we got access to Department of Immigration records, which were old departure cards in shoe boxes in a shed in Canberra.”

Dr Hobbs presented the study in 1979 and it was published the following year (LINK http://www.biomedexperts.com/Experts/Abstract.aspx?pid=7228317). Of the 6200 workers whom the team traced, 220 (3.5 per cent) had pneumoconiosis, or serious lung damage, and 26 had mesothelioma. Sixty men had already died from respiratory cancer – nearly twice the mortality rate compared with all Western Australian males. The study also found “a strong relationship between intensity of asbestos exposure and these diseases”.

“I think we all had an idea of what we were going to find by then,” Dr Hobbs says. “But what did come out for the first time was that asbestosis and mesothelioma could appear a relatively short time after exposure and that blue asbestos was the deadliest of all asbestos being mined around the world.”